What is it about salty paintings, drawings, tattoos and photos? Anything to do with ships and sailors sparks my imagination.

Back in the old days only bikers, sailors and hookers had tattoos.  A Cobra, a dagger stabbed through a heart, a skull, an anchor or a sexy girl permanently printed on one’s arm, leg or chest–that’s how roughnecks set themselves apart from prim and proper society.  But these days every high school girl and nerdy computer-coder wears a full sleeve of psychedelic scribble.  When I see vivid tattoos, my mind goes to late night drinking and slumming in waterfront bars across the Western Pacific and sharing a house with a bunch of bikers and sailors in Central California.

A painting of a brawny ship cruising on a storm-tossed sea conjures thoughts of a sailor, curled up in his bunk below decks.  As the ship rises and falls on the watery hills, the sailor sways gently from side to side.  He’s reading a novel about adventure and romance in an exotic land.

The sight of a wreck beneath the waves, provokes the fear of running up on a reef in a storm or being struck by enemy torpedoes. The mind’s eye sees sailors scrambling for a ladder trying to escape from a compartment below decks.  Tons of seawater rushes in upon them.  They are trapped and drowning as the ship sinks to the bottom.  Those who escape are swept away on mile-deep cold water and drowned in the vast ocean.  A few passengers drift in a life raft.  A lone survivor washes up on a deserted beach, miraculously alive at sunrise.

Drawings of sea creatures dragging a ship down to the briny deeps fills a seafarer with fear and curiosity.   Are sea monsters a myth?  Nobody knows, but all wonder about the early sailors who crossed the vast uncharted oceans.  The schools of whales, sharks and dolphins they must have seen.  The injuries and deaths that occurred after being stung by a Manta Ray, bit by a Shark, rammed by a Whale, dragged to the bottom by a gigantic Octopus or Squid.  Yet, we all know that in there free time sailors and fishermen are famous for spinning yarns that heighten and perhaps exaggerate the facts just a bit.

Scrimshaw makes me wonder about the lives of those tough old sailors who hunted whales aboard wooden ships on the high seas.  I imagine a group of old salts gathered in the foc’sole after long days of killing whales.  Oh, to be there and hear the stories they told.

If you enjoy a good sea story, try the Sea Adventure Collection by Malcolm Torres.  The first story in the series, Sixty-Four Days, is free on all eReaders.  Honest reviews are greatly appreciated. 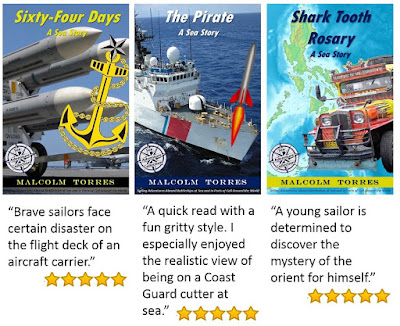